The aim of this paper was to study distribution of the hepatic artery and portal vein of the
portal system of the liver in ground squirrels (Spermophilus citellus) and compare these data with
those concerning the rats, rabbits, guinea pigs and nutrias. The liver of the ground squirrel receives
the oxygen and nutrients through blood from two large blood vessels: portal vein and hepatic artery
(a. hepatica propria). The portal vein is formed by the confluence of three main venous blood
vessels: v. gastropancreaticoduodenalis, v. gastrolienalis and v. mesenterica cranialis. It collects
venous blood from the stomach, pancreas, spleen and all of intestines except the rectum. The portal
vein enters the porta hepatis on the liver together with the hepatic artery. Five venous branches of
different size separate from the portal vein and ramify into the respective liver lobes.
Blood leaves the liver through the hepatic veins that start with the central veins. Three large hepatic
veins and two venous trunks drain lobes of the liver and enter the caudal vena cava as it passes
through the liver.
A. hepatica propria supplies the liver and gallbladder with oxygenated blood. It raises from the
hepatic artery (a. hepatica) wich is the third branch of the celiac artery. A. hepatica propria in the
portal fissure is divided into two branches, of which the left branch brings arterial blood to the left
hepatic lobe, and the right branch brings it into other liver lobes. 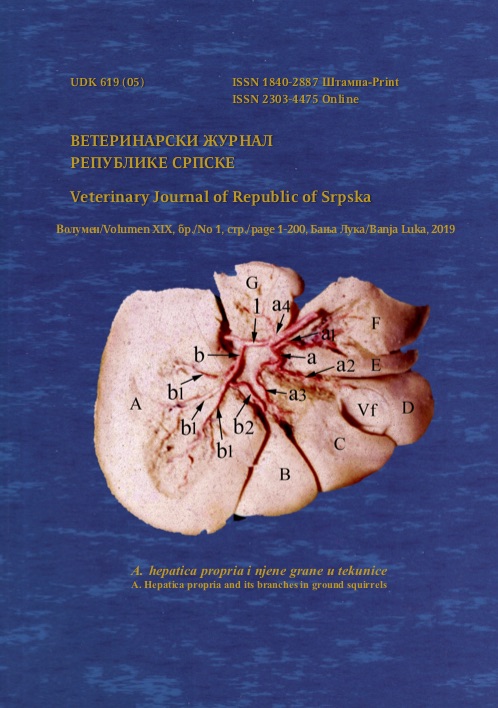