Adsorption, as an easy and effective technique, is widely used to remove
a large number of dyes from aqueous solutions. Activated carbon is the most
desirable adsorbent, but due to its high cost, its use is limited. Proving the
possibility of adsorption and its efficiency performed on cheap adsorbents is a
great challenge and interest of many researchers in the past few decades.
In this paper, unmodified (P) and modified sawdust obtained in two ways
(HCl treatment and NaOH treatment), labeled as PHCl and PNaOH, are used for
the removal of the methylene blue dye. Adsorption experiments showed that
the optimal time for adsorption is different, for the sample PNaOH – 30 min, for
the sample P – 45 min, and for the sample PHCl – 60 min. By applying nonlinear
kinetic models to the experimentally obtained data, it was found that the best
model that describes this adsorption is pseudo-second-order model.
By examining the effect of pH values on adsorption, different results were
obtained (for samples P and PHCl the optimal pH value is pH=11, the PNaOH sample
is effective in a wider range of pH values).
The analysis of the effect adsorbent dose on adsorption process showed
that the efficiency of dye removal decreases with increasing mass of adsorbents.
The obtained values of the coefficient of determination in Freundlich's
model for samples of unmodified (P) and modified sawdust (PNaOH) indicate that
the adsorption of the methylene blue dye is multilayer type adsorption. For the
PHCl sample, neither the Langmuir nor Freundlich model adequately described
MB dye adsorption. 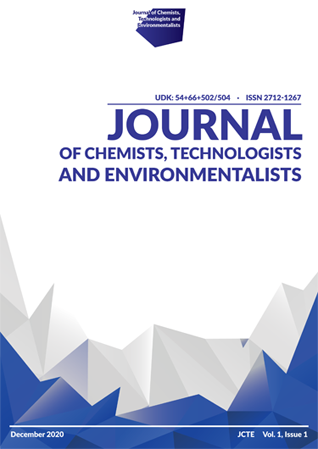 Vol. 1 No. 2 (2021): Journal of Chemists, Technologists and Environmentalists