Small and medium enterprises play a key role in the economic development of many countries. Precisely for that reason, there is research that examines and analyzes this connection and these effects. Numerous studies on the role and importance of small and medium-sized companies, both in BiH and beyond, highlight and point to the importance and need to strengthen the role of small and medium-sized enterprises. Thus, the authors point out that small and medium enterprises are the drivers of development in most countries, while in BiH there is an entrepreneurial initiative but without significant government policy when it comes to implementing business ideas of entrepreneurs and potential entrepreneurs, despite their success spreading to society.Small and medium enterprises are the subject of numerous researches and analyzes. Among these analyzes, it is often examined how small and medium-sized enterprises (SMEs) affect economic growth expressed in gross domestic product (GDP). Research generally confirms that SMEs boost economic growth and development, reduce unemployment, and contribute to innovation. In this context, the aim of this paper is to examine the relationship between individual microeconomic and macroeconomic components related to small and medium enterprises but also to gross domestic product. In this case, the gross domestic product is observed through GDP per capita, and the research examines the effects of the observed variables on GDP per capita. The period covered by the analysis is from 2004 to 2019. Data are on an annual basis. Theoretical and empirical research seeks to answer the following research question: Which components of SME business increase GDP per capita in BiH? The answer to this research question has been investigated using several scientific methods. The research includes a review of the literature, analyzing the data that examine these relations and which indicate their impact on economic growth and development. Examination of the correlation and influence of the analyzed variables was performed using the method of correlation and regression. The obtained research results show that the only factor that has a positive and statistically significant impact on the GDP per capita growth rate has loans granted to the private sector. Other factors, whether positive or negative, do not have a statistically significant impact on GDP per capita. The number of days required for business registration has a negative effect on GDP growth per capita. As the number of days to register a business decreases, so does GDP per capita. On the other hand, insolvency resolution of companies is positively maintained at GDP per capita. The unemployment rate has a negative effect on GDP per capita, while inflation has a positive one. Investments in R&D also have a positive effect on GDP per capita. Such findings indicate that BiH should focus on these factors if it wants to stimulate growth measured through GDP per capita through small and medium enterprises. 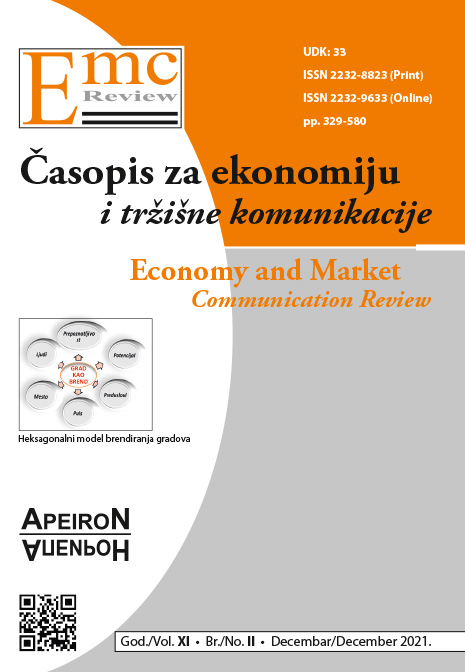